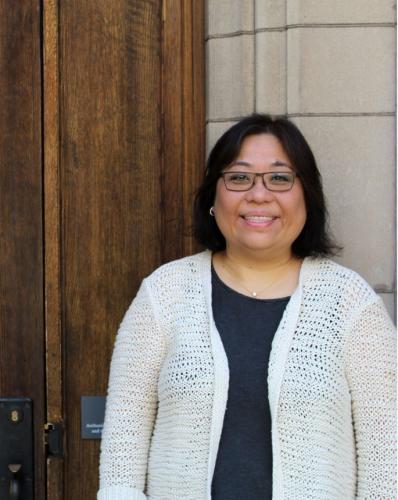 Longtime members of Yale’s faculty ranks often don many different professional hats—director of undergraduate or graduate studies, head of a residential college, department chair, academic dean—over the course of their careers. Grace Kao, one of this year’s cohort of newcomers to the Faculty of Arts and Sciences, wasted no time in joining in the tradition.

Kao, who moved into her office at 493 College Street in July, arrived in New Haven with more than a handful of titles and affiliations: professor of sociology; fellow of the Center for the Study of Race, Indigeneity, and Transnational Migration; affiliate of the Ethnicity, Race, and Migration Program; faculty director of the Education Studies Program; co-director of the Center for Research on Inequalities and the Life Course (known as CIQLE); and fellow of Grace Hopper College. For many, the weight of such a range of responsibilities might seem daunting, particularly just weeks after moving to a new institution. But Kao—brimming with energy and enthusiasm for the challenges ahead—is ready to dig into her new life at Yale.

In a recent interview, Kao spoke about her trajectory into academia. As an undergraduate at the University of California, Berkeley, she said, “almost by accident, I took a sociology class—and I was hooked. I knew I would go to graduate school to study sociology.” More than 20 years later, that early passion has become her guiding pursuit. “I finished graduate school [at the University of Chicago], and the University of Pennsylvania was my first and only job” before Yale. “I feel extremely fortunate—I don’t think I knew [at the outset] how few Asian Americans, especially Asian American women, did this for a living.”

Kao is the first woman of color—and the first Asian American—to hold tenure in Yale’s Department of Sociology, and she does not shy away from the distinction. “I do think it’s important,” she said, adding that since the announcement of her appointment her inbox has been flooded with emails from students at the University of Pennsylvania lamenting her departure—and from their counterparts at Yale, eager to welcome her.

A quantitative sociologist who describes herself as “a data junkie,” Kao explores the differences in people’s life outcomes based on race, ethnicity, immigrant status, and other demographic factors. “I am very interested in generational differences—for example, whether new immigrants are more or less advantaged in terms of their educational outcomes” than earlier immigrants. Another of her current areas of focus is adolescents, and how they form relationships. “In my research when I was finishing my Ph.D., I noticed that kids compared themselves to people of the same racial or ethnic groups. That got me interested in peer networks.”

Kao carries out her studies using large sets, rather than through person-to-person interviews. This, she explained, allows her to look beyond the inherent limitations of individual subjects’ perceptions. The data that Kao uses for her research on peer networks—a vast trove of information from a nationally representative sampling of schools—includes students’ demographic details as well as their responses when asked to name their five best same-sex and five best opposite-sex friends. This enables Kao to cross-reference the answers against information about the students’ race and ethnicity, and to look at how these factors affect reciprocity of friendships. (In contrast, a subject who is asked in an individual interview to name friends of different races will “tend to overreport,” Kao said, in an attempt to check off as many boxes as possible.)

The findings have been illuminating: “There are definite race and gender differences. White girls are more likely to have reciprocal friendship outcomes than minority boys.” And because the study was conducted in several waves, Kao is able to look at information from the same cohort of respondents beginning in their teens and running through their late 20s and early 30s. Thus, “There was an opportunity to link what they did in the past to their friendship and romantic relationship choices in the present.” The result is a book, currently under contract, entitled Interracial Friendships and Romantic Relationships, that Kao is co-authoring with fellow researchers Kara Joyner and Kelly Stamper Balistreri.

Amid the whirl of research, writing, and revisions, Kao also has big plans for her work in the classroom. With interests spanning from social demography to Asian American and ethnic studies, she is a natural fit for Yale’s cross-disciplinary approach to education—at once a social scientist and a humanist. This fall semester, she is teaching a graduate-level class on the sociology of education and an undergraduate course, entitled “Race, Ethnicity, & Immigration.” The latter is “an introduction to the sociology of race and ethnicity, but with probably a heavier focus on social demography and population and about how our immigration laws have affected the types of people who immigrate to the U.S. My hope that undergrads who complete the class will be well-versed in what the population looks like and how it has changed.”

This same focus on quantitative literacy underpins Kao’s strategy for developing the Education Studies Program in Yale College. In setting her goals for the program, Kao explained, “I want to think about what the students in the program will leave with—a more unified sense of what education research is about.” As the program’s inaugural faculty director, she recognizes the opportunity for students to learn from someone who is active in current research—“to learn what research is like, and how to do it.” This research, and a thorough grounding in basic demographic statistics, is, Kao said, “a prerequisite” for students eager to give back to the community by teaching. (In this role, she will work closely alongside a fellow sociologist, Mira Debs, who was recently appointed the program’s executive director.)

Kao brings extensive experience to the task at hand: in Pennsylvania, she was affiliated with the university’s Graduate School of Education; she has served on committees of the American Education Researchers Association; and she is a frequent organizer of education sessions for the American Sociological Association. “Education research,” she said, is “a big part of my identity.”

So, too, is involvement in her field’s professional organizations. She was recently voted vice president-elect of the American Sociological Association (ASA), a reflection of her strong leadership in a group that comprises nearly 11,000 scholars. And in August, the ASA Section on Asia and Asian America awarded her a Contribution to the Field Award for 2017, citing her “illustrious accomplishments in the areas of research, teaching, and service.” 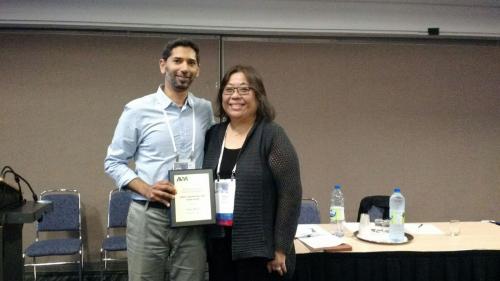 Grace Kao receives the American Sociological Association Section on Asia and Asian America Contribution to the Field Award for 2017 from Pawan Dhingra, chair and professor of sociology at Tufts University. Photograph courtesy of Grace Kao.

Asked about experience of leaving one university after two decades for the uncharted waters of a new institution, Kao didn’t hesitate: “From the time I interviewed for the job, I met so many wonderful people” through the various Yale departments and programs of which she now is a member. Now, “for being here for only a few weeks, I feel quite welcome.”

If there is one small regret at this early juncture, it’s the guitar meet-up group that she left behind in Philadelphia—a collection of fellow musicians with whom she would play for most of the day every Saturday. Earlier this summer, the group organized a night of ’80s music—her favorite—as a farewell tribute. She is eager to fill the void, joking that her department chair, Philip Smith—also a guitarist, “had to write in my offer letter that he would play with me.”