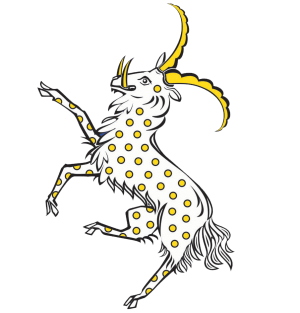 “The Yale” is a mythical, goat-like beast historically used in European heraldry. Its name is thought to be derived from the Hebrew word yael, meaning ibex.

Long used as a heraldic symbol associated with the British royal family, “the Yale” was a favorite symbol of Lady Margaret Beaufort in the 15th century. Lady Margaret, the mother of King Henry VII, was a benefactor of Christ’s College and St John’s College at the University of Cambridge, and her mythical “Yale” can still be seen as sculptural decoration on the gates of those colleges. At Cambridge, this heraldic symbol was used as a marker of higher education, a tradition which is continued at Yale University to this day.

“The Yale” can be found throughout the university campus and, while it is no Handsome Dan, the goat-like creature is present on the entrances of Davenport College and Timothy Dwight College as well as on the official banner of the president of the university and on the mace carried annually at Commencement.

In its most recent addition to university heraldry, “the Yale” is featured prominently in the Faculty of Arts and Sciences coat of arms, playfully representing the intellectual curiosity and inquiry of the FAS faculty in both the Arts and the Sciences.