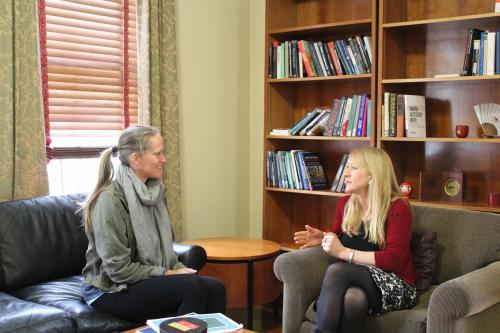 A major Yale-coordinated survey released last month points to several factors affecting women’s careers around the world. Led by Frances Rosenbluth, together with two Ph.D. candidates, Gareth Nellis and Michael Weaver, Women in the Global Workforce was the second annual survey of the Global Network for Advanced Management. Its goal: to illuminate the driving forces behind continued underrepresentation of women in business leadership ranks.

During an interview in her office on Hillhouse Avenue, Rosenbluth (the Damon Wells Professor of Political Science and a member of the FAS faculty since 1994) explained that the survey—reaching nearly 5,000 respondents from more than 100 countries—provided an opportunity for inquiry that was “scientifically more robust” than would otherwise have been possible.

The survey participants comprised students and alumni from 28 business schools in the Global Network (of which the Yale School of Management is a founding member), and their responses showed that certain issues hindering women’s professional advancement are consistent independent of cultural or national background. As Elizabeth Wilkinson, associate director of global initiatives at the School of Management, described it, the survey “lets us look at the issue globally.”

On March 8, in a webinar simulcast to an audience in 43 countries, Rosenbluth took part in a panel—moderated by Della Bradshaw of the Financial Times and including faculty participants from three different continents—to discuss the outcomes. As Alan Gerber, FAS dean of social sciences and the Charles C. & Dorathea S. Dilley Professor of Political Science, noted, “It is always exciting when an exceptional member of our outstanding faculty collaborates with fellow scholars and shares her insights on the world stage. Frances Rosenbluth’s insightful research is of broad interest and her valuable work merits wide attention.”

There are, Rosenbluth said, “three key striking findings” from the survey data. First is the statistical discrimination that stems from imperfect measures of workplace productivity. When asked to compare hypothetical employees according to a given set of traits, survey respondents showed no bias based on gender. Yet they were 36 percent more likely to recommend for promotion an employee available to work around the clock. Time, as the saying, goes, is money. Because women, in most societies, are responsible for a larger share of household and family work, the expectation of availability at all hours “can be as starkly negative for women as if employers were biased against women,” the survey report states.

However, when presented with information on the candidates’ levels of productivity in their job performance, respondents no longer gave weight to off-hours availability. Round-the-clock access to an employee’s time is, as Rosenbluth describes it, a “noisy signal” often used as a proxy for productivity in the absence of better measures. This tendency, the report notes, is “costly not only to women, but also to men who may prefer a better career, family or work-life balance.”

Survey participants believed that assertive individuals (regardless of gender) are more likely to advance in their careers than those with more reserved personalities. This preference was universal, but the respondents’ views on assertiveness varied widely across cultures. This means that in many cases, according to the report, “professional women face a trade-off: the very characteristic that helps them at work may harm them in their social relationships.” Respondents also voiced a belief that senior management expects mothers to handle a disproportionate amount (65 percent) of child care duties—a perception that (whether accurate or not) can be harmful to women’s advancement while also pulling men back into stereotypical roles.

Although the findings do not yield immediate solutions to the problem of gender imbalance in the workforce, Rosenbluth said, they do indicate areas for further investigation and action. During the spring recess, she presented the initial research at a seminar series in Paris sponsored by the Organisation for Economic Co-operation and Development. Her talk, “Sex, Markets, and Power: Why Time is Money, and What to Do About It,” focused on the persistence of gender inequality in politics and economics and pointed to potential policy solutions that would incentivize firms to eliminate statistical discrimination.

Wilkinson, at the Yale School of Management, said that one goal of the annual Global Network survey is to help shape future programming for students. A webinar viewing party on campus (from which Rosenbluth participated in the live panel discussion) was well attended by students, who expressed interest in course topics that would help spur concrete action toward equal representation of women in the workforce. Meanwhile, together with Nellis and Weaver, Rosenbluth will use the data generated by the survey to produce an article for publication in an interdisciplinary outlet, likely at the intersection of politics, economics, sociology, and business—one that “will appreciate the innovative design and very strong findings” made possible by the survey method.

“Frances Rosenbluth has long been recognized—at and far beyond Yale—for her path-breaking research on the political economy of gender,” said FAS Dean Tamar Gendler, the Vincent J. Scully Professor of Philosophy and a professor of psychology and of cognitive science. “We can all look forward to following both the scholarly evolution and the applied impact of her current undertaking in this crucial area of investigation.”