As of July 1, 2020, Yale’s home for scholarship on Italian language, culture, and history has a new name: the Department of Italian Studies.

The department was previously known as the department of Italian Languages and Literature. The new label reflects the fact that the department has long applied the “studies” approach in practice. As current department chair Jane Tylus and spring 2020 acting chair Millicent Marcus explain, it simply makes official the department’s established habit of interdisciplinarity. Established in 1976 under the direction of Prof. John Freccero, the department launched the annual journal Yale Italian Studies and subsequently created an A. Bartlett Giamatti Fellowship in Italian Studies; both are early reflections of the department’s interdisciplinary approach. Marcus and Tylus explain: “While the department remains committed to an ongoing focus on all things linguistic and literary, this early interest in the expansive field of Italian has continued unabated, and we are delighted that the University has agreed to honor officially a decades-long practice of involving our department in a broad and inclusive academic vision.”

“In philosophical terms, the name change reflects the expanding horizons of italianistica beyond an exclusive focus on language and literature. While linguistic and textual analysis remain integral to our scholarly approach, we have become increasingly aware of the need to bring Italian into conversation with film and media, history, comparative literature, art and architecture, gender studies, the history of science and medicine, the performing arts, political science, religion, and the burgeoning new areas of translation studies and Mediterranean Studies.” 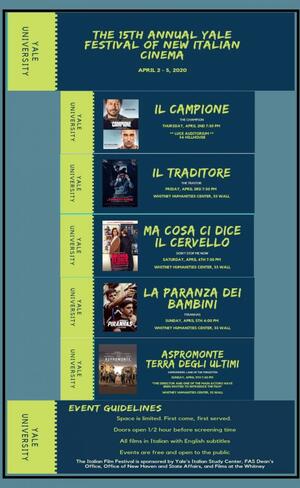 “It would be no exaggeration to say that a holistic scholarly approach is built into the very idea of Italian as a field. No study of the Italian Renaissance, to take the most obvious example, could confine itself to literary manifestations alone. Moreover, Italy’s own long history in the aftermath of the end of the Roman Empire as a fragmented political entity – and now as an integral member of the European Union – mandates an academic and pedagogical vision that studies the intricate and complicated relationships of Italians, and Italian, with other nations and national cultures.  Our program’s name change acknowledges the need for a variegated, dynamic, multi-disciplinary approach to italianistica as a whole.”

The Italian Studies curriculum invites students to immerse themselves in this intellectually holistic field of italianistica. Undergraduate majors combine courses in Italian with courses in other languages and literatures, and in history of art, history, philosophy, and other relevant subjects. Graduate students develop deep knowledge of Italian as well as connectivity to other fields, and this practice has facilitated intellectual exchange among faculty within and beyond Italian Studies. Even before the recent name change, the interdisciplinary push had been formalized by the establishment of such joint Ph.D. programs as Italian-Film and Media Studies, and Italian-Renaissance Studies degrees.

Future undergraduate and graduate courses will continue to create space for adventurous thinking about Italy, its histories, and cultures. A course inspired by environmentalist thought will engage ecological perspectives on Renaissance writings and Italian film representations of the land. Emigration will be the theme of another course, while yet another will feature a women’s studies approach to medieval literary works. A team-taught course on the Holocaust will focus on French and Italian fiction and film within an international context. 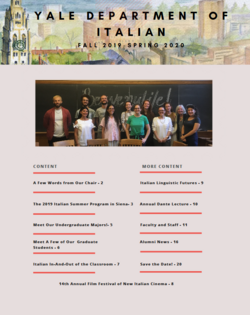 Faculty research has long exemplified the interdisciplinary conversations that the new title of the department acknowledges. Giuseppe Mazzotta’s work places the great writers of Italian literature and philosophy within multiple “worlds” of understanding; literature for Mazzotta has long been a point of departure rather than a place of arrival. Marcus’s numerous books on film, situate Italian cinema in the midst of conversations about gender, religious persecution and the major historical and social developments of the twentieth and twenty-first centuries. Tylus has long been interested in the theory and practice of translation in early modern Europe. Her current project, “Saying Goodbye in the Renaissance,” which emerged from a course taught at Yale Divinity School in 2019, examines leave-taking from multiple perspectives – religious, social, gendered, artistic. Christiana Purdy-Mourdarres has written extensively on the interface between theology, food studies, and literature in the medieval period; Lector and Director of Undergraduate Studies Simona Lorenzini has written a book that works across traditions of Latin and Italian literature and philology in the 14th century; and Lecturer Serena Bassi focuses on issues of translation, gender, and immigration in the 20th and 21st centuries.