Faison: Bringing the Cosmos to the Classroom 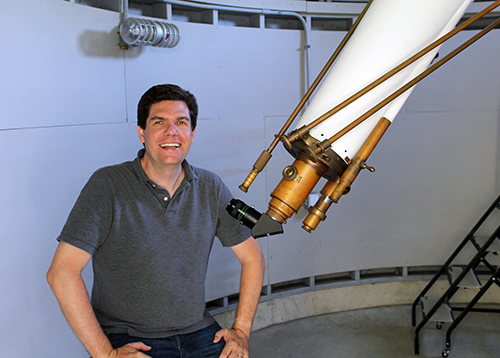 On a quiet evening, under a cloudless night sky, residents of New Haven wend their way up Prospect Street. Atop Science Hill, the Leitner Family Observatory and Planetarium awaits, couched between the stars and the hill’s grassy banks. For 13 years now, Michael Faison, lecturer in the Department of Astronomy and founding director of the observatory, has developed this space where both the Yale and New Haven communities can fix their gaze upward and learn a bit about what it means to study the cosmos.

Faison himself began his journey into astronomy looking at that same night sky, albeit a thousand or so miles south, in rural Alabama. As a child, he spent countless hours tinkering alongside his father, an electrician—together they built solar cells, motors, and ultimately, a telescope.

“The skies are really dark in the middle of nowhere,” Faison laughs, recounting how, as a young “sidewalk astronomer,” he would search for the constellations he had read about, scoping out their brightest points.

Years later, as an undergraduate at Oberlin College, Faison decided to study physics and astronomy. He continued to follow his passion for telescopes, traveling to the Arecibo Observatory in Puerto Rico to research pulsars and, one winter term, creating his own small class on telescopes to instruct other students. A penchant for teaching had already begun to emerge, one that would surface more profoundly later in his career.

After receiving his B.S. in Physics and Astronomy from Oberlin in 1994, Faison undertook doctoral work at the University of Wisconsin, conducting research at the Karl G. Jansky Very Large Array (a radio astronomy observatory) in Socorro, New Mexico. He completed his Ph.D. in Astronomy in 1999 and, after brief stints at Beloit College, Northwestern University, and Reed College, arrived at Yale in 2004.

“In terms of teaching about science, we kind of have it easy because people are already really interested in astronomy,” Faison says, adding playfully, “nothing sucks them in like black holes.” On Tuesday evenings the observatory is open to the public, offering presentations at the planetarium and viewings at the telescope, while also providing an invaluable experience for the Yale student astronomers who work with visitors from the community: “It is very important to be able to communicate your research to a lay audience—if you can’t explain what you’re doing to a 10-year-old visiting the planetarium, you don’t really understand it.” Faison’s approach to running the observatory thrives on this gravity that pulls together graduate students, children, undergraduates, professional astronomers, and people who simply want to spot the Big Dipper. 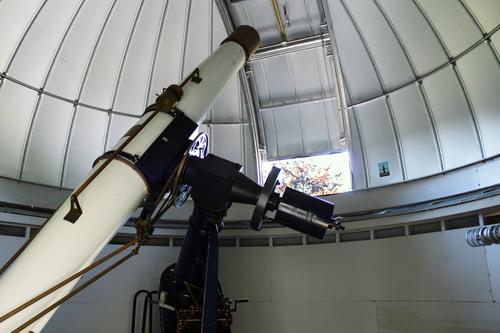 A refurbished Grubb refractor at the Leitner Family Observatory and Planetarium. This device was originally brought to Yale by the Astronomy department in order to observe the 1882 transit of Venus. Photograph by Christian Soler and Leah Salovey for the FAS Dean’s Office.

The impact of Faison’s methods reaches beyond the bounds of the local area, as exemplified by his project, the Yale Summer Program in Astrophysics (YSPA). Now in its second year, YSPA accepts 32 STEM-interested high school students from around the world to conduct research in astronomy. The program’s success might be measured by the growing number of applicants or increasing selectivity (less than 10% of applicants were admitted last year), but YSPA also has become a means of spotting some of the brightest young scientists and encouraging them to don the Yale blue: “our first priority is to give students a challenging summer research project and to give them a formative experience before applying to college; but ultimately, we hope to show them that Yale is fantastic place to experience both a liberal arts curriculum and a very strong science research environment.”

Faison’s focus, as director, on community outreach has allowed many amateur astronomers to take their interests from the sidewalk to the eye of the silos that house the observatory’s telescopes. But as a faculty member, he believes first and foremost in the observatory’s role as a classroom. All introductory astronomy courses spend at least one clear evening in observation, and Faison would like to see the planetarium and its resources extend beyond the department: “We have visualizations of the earth so that we can talk about climate and geology; we could have classes from the geology and geophysics department, environmental science, or from the forestry school…. The planetarium is a type of teaching technology that we would like to use more in other classes.”

Among his efforts to increase use of the observatory by those in other disciplines, Faison has developed a course in which students—from the arts as well as the sciences—produce interactive media, employing the projectors to create original displays. And within his own department, he organizes what he calls “informal teaching chit-chats.” In astronomy, he explains, there are “a number of weekly meetings that are topic specific—on galaxies, exoplanets, etc.—and I thought, ‘I want to get together and talk about teaching.’ Some of the graduate students have been coming to them, and I’m very interested to hear their perspective on how we teach labs and how we teach them to teach.”

The talks are also a forum for faculty members to learn from each other’s experiences and begin larger conversations about pedagogy, in much the same way that scholarly interactions can spur new scientific research. One insight that Faison often shares is the value of co-teaching. After partnering for a semester with Frank Robinson, lecturer in physics and research scientist in geology and geophysics, he began to understand the advantages of talking through the course with another person: “You have to verbalize the reasons behind your decisions and think more about how you’re structuring the class, or how the class is going.”

Ultimately, Faison’s pedagogical success stems from a readiness to re-envision his strategy in the classroom. As he recounts stories of his own education, of professors covering entire blackboards while students scribbled notes endlessly, the message becomes clear—one need not teach the way one has been taught, nor uphold some apocryphal notion of how to teach science. For this dedicated educator, the questions of the classroom stand on par with the questions of deep space: “When I do research, I study gas in the Milky Way galaxy, a very interesting intellectual problem, and I’m adding a few bricks to the edifice of knowledge. Now, if I do a really good job teaching an introductory science class and 100 students leave thinking, ‘Wow, astronomy is cool, and I know more about science,’ I feel like that is a much bigger impact I’ve had in the universe.”