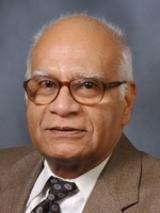 TN Srinivasan, BA (Mathematics) University of Madras 1953, Ph.D. (Economics) Yale 1962, Instructor and Assistant Professor in 1960-1961 and again in 1964, and Professor since 1968, you are a consummate economist and towering intellectual. You have made fundamental contributions to our understanding of the process of economic development and international trade. You are an essential voice for openness, liberalization and individual freedom, and a powerful scientific force for progressive reform in developing countries in general and in India in particular.

Your work is characterized by clarity, rigor and relevance together with an awe-inspiring mastery of all scholarship that came before it. Your vision has always been wide: from theory, to the empirical testing of hypotheses, to the formulation of policy. Early theoretical papers examined questions of optimal growth, choice of technique, and fundamental issues of economic planning in open economies. You were a pioneer of applied general equilibrium analysis and have made fundamental contributions to the economics of rural organization, and of malnutrition and its measurement.

It is often said that if you ask six economists a question, they will give you six answers. Policymakers know that the answers that should be listened to are yours. These cogent answers would include ones demolishing specious arguments for protectionism, proving that trade barriers are inferior to alternative government policies even when intervention of some sort is justified, and establishing the fundamental links between trade policy and development. You have been an inspiration to your colleagues through your prodigious research accomplishments; your teaching of generations of graduate and undergraduate students; your service as the founding editor of the leading journal in development economics and board member of literally a dozen more; and through your advising of international organizations. Perhaps the most distinguished of your many honors came when the President of India presented you with the Padma Bhushan decoration for contributions to Literature and Education, the third highest civilian award of the government of India.

Known for the clarity of your thought in speech and writing, your colleagues note how, after a confused discussion at the Cowles coffee hour or a fuzzy seminar, they often will receive an email from you with a precise analysis, crisply illuminating their errors, and clarifying the issue beyond any subsequent doubt. Citizen of the world with a global vision before globalism was all the rage, your colleagues hope that for many years to come you will fly off to help fix the world, but return to Yale to elevate their conversation and straighten out their thinking!